Why decouple now?
Why is the world decoupling supply chains from China now? The pandemic has shown that dependence on single source Chinese manufacturers for critical items leaves the world very vulnerable. For many items, just-in-time inventory management must move to just-in-case. “Covid really put a spotlight … on supply chain risk, and one of the things that we’re seeing is supply chain derisking has moved all the way up to the boardroom level, as we see now concentrations in our supply chains that was maybe not evidenced before,” according to PwC U.S. Chair Tim Ryan.

The combination of the trade war and pandemic showed that retailers also had relied “too much” on production in China, former Macy’s CEO Terry Lundgren told CNBC earlier this year. Japan’s government has started subsidizing some companies to invest in factories in Japan and South-East Asia as part of efforts to reduce reliance on manufacturing in China. They have allocated over $500 million to this effort. In addition, geopolitical trade wars and western populations sick and tired of sending jobs off-shore are creating political pressure in the West. China’s crackdown on freedom loving people in Hong Kong and the mainland, and the repression of the Uighurs in internment camps present the world with a moral dilemma. 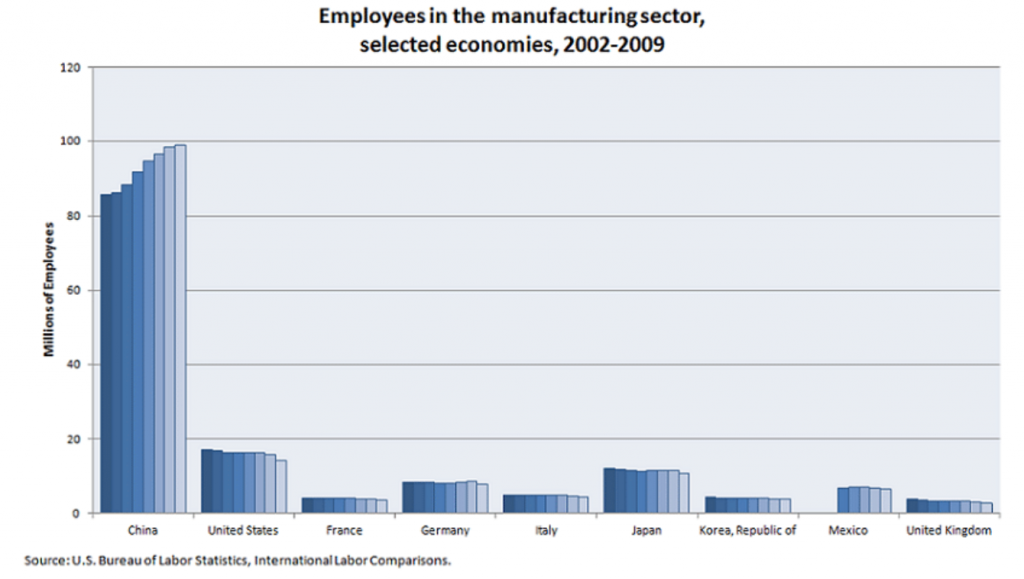 What are some possible solutions to solve the disconnect between a desire to diversify supply chains and lack of manufacturing muscle outside of China? Mathematically, you have to dramatically increase the productivity of the workers you have and add more workers. These two dynamics are tied together. When workers are more productive, they can be paid more and the jobs become more prestigious thus attracting more talent.

Invest in workforce training
From IndustryWeek: “According to the U.S. Department of Labor, as of July 2017, a record 6.8 million jobs that require skilled laborers were left unfilled. Many of them are manufacturing jobs. The National Association of Manufacturers reports that a skills gap has caused about a half-million manufacturing jobs to remain open, and consulting company Deloitte predicts that by the end of this decade, as many as 2.4 million manufacturing jobs may go unfilled, putting $454 billion in production at risk.” Manufacturers must start investing more in up-skilling their workforce. The attitude that every open position must be filled by someone already skilled in that job must stop. There is no way for the normal citizen to stop working and pay for additional education to increase their skills in a rapidly accelerating technology based world. What companies are taking the lead in this challenge? The companies that are winning. Amazon recently announced it will be spending $700 million to retrain about a third of its workforce in an effort to improve the technical expertise of its entry level coders and data technicians.

Decrease the obsession with four year college degrees
At some point in the past several decades it became the goal to send every child to a four year college, regardless of the cost or the resulting job prospects. It is yet another effect of the decline in the prestige and investment in the manufacturing workforce. Apprenticeships, on-the-job training, and vocational programs at community colleges are all ways young people can be taught blue-collar and manufacturing skills. These are also paths that lead to a successful life. Germany’s world-renowned manufacturing apprenticeship system has created a middle market manufacturing base envied by the world for its quality products and expertise.

Invest in automation to increase worker productivity
You would think that the country with the largest number of lower cost manufacturing workers would be the one investing the least in modern automation.

Let’s take a look at the number of robots. 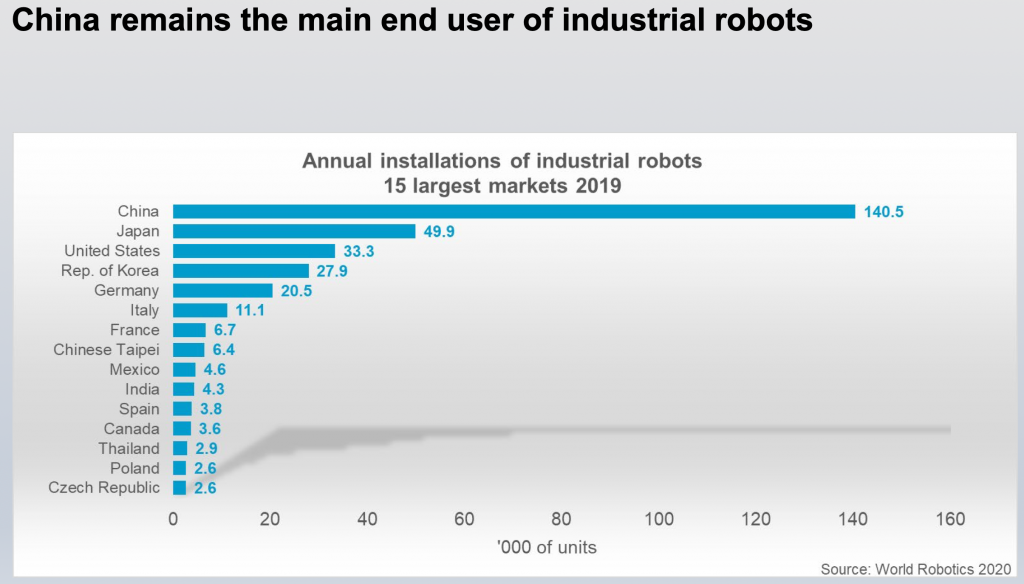 Not only does China have the largest number of baseline workers and the largest number of highly skilled manufacturing engineers (e.g. CNC expertise), but they invest the most in automation. As for the United States, according to the researcher Eric Brynjolfsson “We did a survey of 850,000 plants [with partners including the U.S. Census Bureau] and found very little adoption of robotics, only 1% of plants are using them so far.”

The country with the most automation has the most manufacturing workers. No jobs will be lost, in fact they will be gained through deploying advanced manufacturing technologies like the industrial internet of things (Industry 4.0, IIoT) and robotics.  A 2019 European economic study found that companies that did not invest in robotics between 1990 and 1998 reduced jobs by 20% between 1998 and 2016, whereas those that did invest from ’90-‘98 created 50% more jobs during the same time period. Dramatically increasing worker productivity via deploying real-time operational data collection and automation will create the virtuous cycle of increasing worker pay, increasing the prestige of manufacturing jobs, and increasing the supply of people wanting to work in manufacturing.

Will we accept the challenge?
The great multi-decade uncoupling has begun but it will fail leaving the world exposed to disruption time and time again unless the pace of modernizing manufacturing dramatically increases. If the pandemic and its impact on critical medial supply chains plus China’s crackdown on freedom loving people does not motivate us to correct this, nothing will. We will deserve what we get in the coming decades: an entirely service based economy held hostage by Chinese manufacturing, increasing inequality and unrest due to the bifurcation of low pay service jobs and very high pay knowledge based jobs, exacerbated by the inability to repay college debt. Strategically, morally, and financially, the global supply chain must reduce its dependence on China, especially for critical products. The path forward is clear on how to accomplish this. Will the United States and the free world accept the challenge?

The Unnecessary Crisis in the American Workforce
Somehow the notion that a four-year college is for everyone has entered the national zeitgeist, but it’s just not true. IndustryWeek Aug 28 2020
https://www.industryweek.com/talent/education-training/article/21140507/the-unnecessary-crisis-in-the-american-workforce

Unmade in America  Decades of decline left the US’s industrial commons incapacitated in the face of the pandemic. MIT Technology Review Aug 14 2020
https://www.technologyreview.com/2020/08/14/1006428/unmade-in-america/

Recent research shows that only 1.3% of firms have adopted robotics, and incremental investment in robots. CNBC Sep 16 20
https://www.cnbc.com/2020/09/16/why-amazon-warehouses-tesla-auto-plants-will-not-go-100percent-robot.html